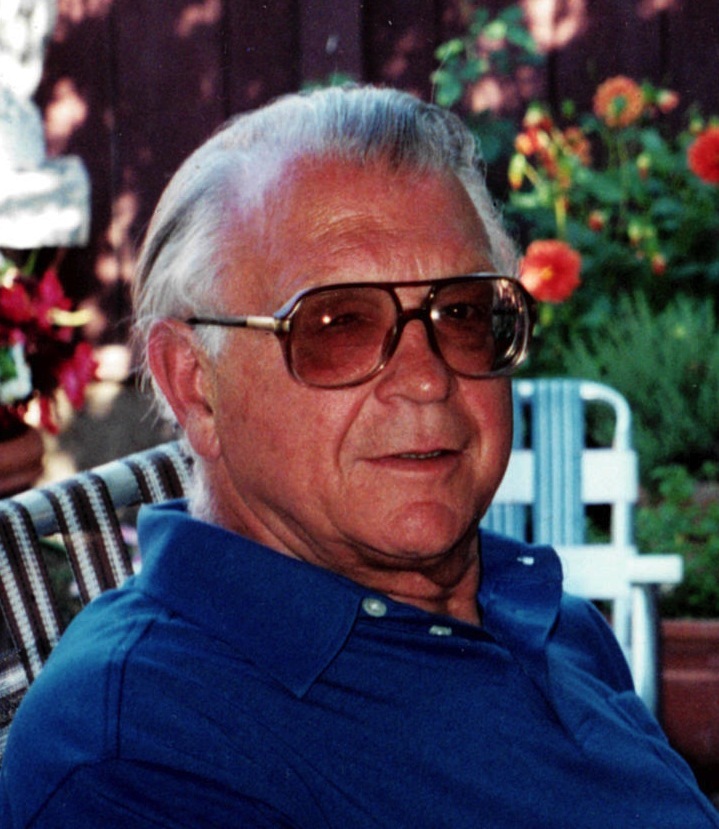 The story of Ed Baldini is that of a true American classic. The son of immigrants, he experienced the joys of both rural and urban living, and of America's hard times and glory days. In many ways, Ed's life mirrored that of our nation. He was tough, caring, hard-working, and family oriented. His was the mold that television and Hollywood worked from. Born in San Francisco, Ed's parents soon moved the family to San Mateo. Their other son, Joe, was often sick, and San Francisco's pollution aggravated his asthma. Ed took to this change the way a duck takes to water, reveling in the idyllic pastimes the new location offered. Playmates were abundant, and Ed spent his time flying kites, shooting marbles and exploring. Ed had his first taste of tragedy when his beloved father died. A produce buyer, Walter Baldini often took his son with him when he travelled to the local farms, and Ed loved their time together. A sudden series of strokes took Walter from the family when Ed was just twelve years old. By his own admission, his father's death haunted him. Ed never fully moved past the trauma, but it cemented what was truly important to him: Family. Ed described himself as a freak of nature. By the age of twelve, he stood five foot, ten inches and weighed an intimidating one hundred and seventy-five pounds. Gravitating to sports, Ed joined the football team. There he excelled, but as he put it, 'I ended my high school football career with a laundry list of aches and pains, a nose I couldn't breath through, and some scholarship offers.' Growing up, school wasn't Ed's primary concern. Losing his father at such a young age, he took jobs where he could find them. The entire family pooled their meager resources to get by in those early years, but soon Ed's natural skill in construction and carpentry allowed him to become the primary bread-winner. In many ways, this relationship with craft was reciprocal. In his early life, Ed gave to his projects, and in return, he gained satisfaction and confidence. He put his back into what he saw as good, honest work, and was rewarded with skills that he used for the rest of his life. Ed stood at a crossroads once he finished high school. As a skilled worker, he could have gone straight to work and made a decent life for himself. However, his brother steered him away from this. Joe wanted to see Ed get a quality education and further himself. Ed spoke many times about how much he respected his brother's opinions, and so he listened. After high school, Ed attended San Jose State University, earning an A.B. and a Secondary Teaching Credential. It also didn't hurt that those in the top thirty-three percentile in college courses were ineligible for the Korean War draft. Ed said that gave him plenty of motivation to excel. After college, Ed continued to work construction and mill jobs until a opportunity came for a substitute wood shop teacher position opened up at Washington High School. It was there that Ed's life completely changed. It was where he met Claire Ferreira. From the moment he laid eyes on his future wife, he knew she was the one. It wasn't long before they began dating, then moving into a serious relationship. By their second date, Ed had told his brother that he'd met the girl that he wanted to marry. He described Claire as 'God's ultimate gift to him' and 'sweet, kind, and the strongest person that he's ever known.' When she agreed to go on that first date, he was so deliriously happy that his students asked him if he was on something. Ed and Claire were married on December 27th of 1958, and remained married for fifty-five years. An incredible achievement that illustrates the strong bond they shared together. Soon afterward, Ed and Claire adopted Christina and Paul, their beloved children. Ed waded into fatherhood the same way he tackled everything: With total dedication. Firm when he needed to be, he still found plenty of time for love and laughter. Wanting the best for his family, Ed continued his education and constructed additions to his house with his own two hands. With Ed, you always knew where you stood. He never minced words when he could get straight to the point. This directness endeared him to many people, but his bosses were often not included in that list. His stories about locking horns with school bureaucrats are as numerous as they are hilarious. However, Ed never fought a battle that didn't need to be fought. He stood up for himself, and for justice, but if there was one thing Ed was not, it was a bully. We who knew him remember a man of strength. One who was ready to laugh or debate with equal vigor. Ed was always there to help you with a problem. If he had a way to fix it, you couldn't keep him away. Above all else, Ed was about family, be it his natural family or just those that he kept close. If you were in his reach, he cared for you in the best way that he knew how. The world doesn't see too many Edward H. Baldini's anymore. A man dedicated to making the world a better place. Someone who cared deeply for quality in all things. If Ed was doing something, he wanted to perform at the top of his ability. He wanted to be a great husband, a loving father, an excellent teacher, and a top craftsman. Ed wanted to honor God and to make this world a little brighter for those that he loved. And in all of these things, he succeeded. We mourn his passing, but are buoyed by his achievements. It is truly a life worth celebration.