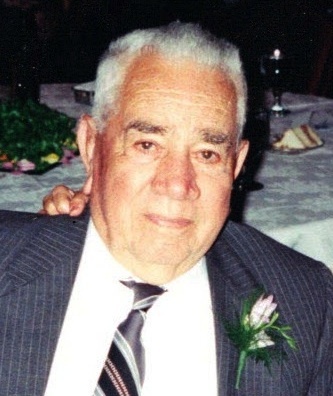 Fernando S. Matos, 93, passed away on Monday, May 12th with his family by his side. Fernando was born on August 12, 1920 on the island of Terceira in the Azores. He was the youngest of three. He attended College prior to joining the Portuguese Army, serving for two years. He met Renee Baptista when he was only15 years old and they were married nine years later on September 3, 1944. Three years later they had their fist son, Fernando (66 yrs) and in 1952 they had their youngest son, Gil (61 yrs). In April of 1960 Fernando moved his family to the United States to provide his sons a life full of endless opportunities. Moving to California, he continued with his mastery carpentry abilities that he obtained in the Azores. Fernando worked for over 20 years as a carpenter and joined the Carpenter's Union. He also built his own home in Fremont along with two additional homes for his sons – it was a labor of love. Fernando spent his retired years in his backyard caring for his garden and birds, building beautiful woodwork and spending time with his wife, sister in-law, sons and granddaughters. Fernando is survived by his two sons, Fernando Matos of Fremont and Gil Matos of Concord, five granddaughters and 6 great grandchildren. In lieu of flowers, the family is requesting that donations be made out to Five Wounds Church in San Jose. A viewing will be held on Thursday, May 15th from 4-7 p.m. at Chapel of the Angels with a Rosary following at 7:00 p.m. A Mass will be held on Friday, May 16th at 10:30 a.m. at Five Wounds Church in San Jose.