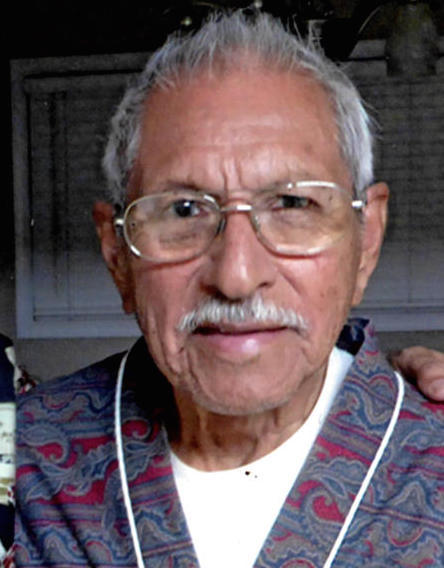 Hilario (Lalo) Barron Ruiz passed away peacefully, at the age of 91, at home with his family. Born in San Luis Potosi, Mexico, Lalo was the fifth of eight siblings, and he was quite proud of his large extended family. He was a devoted son to Felicitas Barron Ruiz and Brigido Ruiz. From the age of five, Lalo was raised in Del Rio, TX. In 1943, Lalo joined the Army and served in the 88th Division (the 'Blue Devils) of the Fifth Army during WWII. The Fifth Army liberated Rome in June 1944. On September 14, 1944, at the age of 19 years, Lalo was wounded near Florence, Italy, requiring a six-month recuperation stay in a Rome hospital. He earned a Purple Heart and a Battle Star for the Italian campaign. Lalo returned home after another year of non-combat duty and married Elvira (Vera) Salazar in January 1947. It is important to note that Lalo had two older brothers (Jorge and Pete) already serving in WWII, so he volunteered. 'They wouldn't draft me because my brothers were already serving, so I volunteered,' said Lalo. His mother had to sign papers agreeing to let him serve in the Army. Most touching was Lalo's response when asked why he joined the Army to go to war: 'Because my mom got $50 per son in the Army, and she would get another $50 check every month; it was hard to earn $50 a month in Del Rio in those days.' Lalo is survived by his wife Vera, son Lalin, daughter Dorinda (Ed), and grandchildren Christopher (Celeste) and Danielle (Agustín) and newly-born great-grandson Isaiah Alexander Barron Ruiz (Christopher's & Celeste's son). Lalo and Vera enjoyed 70 years of a loving marriage. Lalo is also survived by his loving siblings, sister Matilde Ruiz Herrera and brother Raymond Ruiz, and many, many nieces and nephews and their families. Lalo is pre-deceased by daughter-in-law Donna (Lalin) and five precious siblings: Juana Grande, Juana Chica, Jorge, Pete, and Beatriz. Lalo exemplified the 'Greatest Generation' and accepted his responsibilities, especially those of fatherhood and provider for the family. Though a very quiet man, he was an outstanding example of a husband and father and demonstrated his family values through his actions, not his words. As an appliance repair technician for Montgomery Ward, Lalo helped many customers in Santa Clara Valley, and he was also 'on call' for his large extended family and his many friends—He was too kind, caring, and helpful to say, 'No' and he knew how to fix everything! Lalo was also a skilled handyman and one of his main 'customers' was his beloved sister, Matilde; Lalo would fix everything for 'Mati!' And, Mati would cook for her brother at every opportunity, especially his favorite, 'fideo.' Lalo was passionate about golfing, and he developed long-term friendships through golf, even teaching nephews & neices who requested lessons. He also loved bowling and became an accomplished bowler and taught his nephew, JR, how to bowl and golf. Though he was from a very poor and struggling family that did not take vacations, Lalo grew up to deeply enjoy traveling. Lalo and Vera loved to dance to Mexican music, and especially to Big Band music. After so many years of dancing together, the younger generation described their dancing using the words, 'smooth as silk on the dance floor.' There are not enough words to describe Lalo's devotion to his wife, Vera, and his family. Lalo was a quiet, yet guiding force, who earned the love and respect of all the family and those who knew him. Family and friends are invited to Berge-Pappas-Smith Chapel of the Angels, 40842 Fremont Blvd., Fremont, Thursday, May 12, 2016, viewing 11:00AM-12:00PM followed by a funeral service, 12:00-1:00PM.