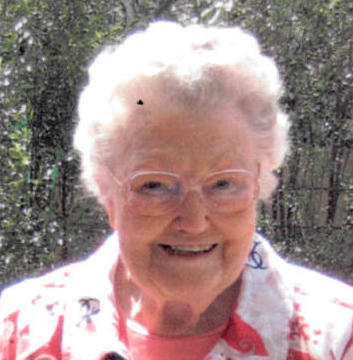 A TRIBUTE TO A JEWEL This here's a story, it's not too long All' bout the daughter of Zula Zong. Don't call her Belle, It's sort of a rule, Don't call her Baugh, she's simply a 'Jewel'. She was born the day before Fourth of July, In the year '19, nine decades gone by. The baby sister of Virginia and Bill, She was raised in Bisbee, the town on the hill. Her father was Ben, and he owned the store, She worked at Good Year, not to be poor. She met Sergeant Frealy at the USO dance, Took a liking to Ben, and gave him a chance. In the year '44, they were hitched by the preacher, A happy young couple, Ben was a teacher, They had two kids who brought them great joy, Debbie the girl, and Dennis the boy. Dennis and Penny had children, (two) Todd and Sarah, and grandma says 'Whew!' And daughter Debbie has lots of pets, With husband Ted, they both are vets. Todd wed Anne and added kids to their bliss Madeleine came first then followed by Chris. Sarah wed Mike and made a family of four Nathan and Ashlyn then added Robert (one more). She used to count beans at the DUSD, But at 72 she said 'enough for me'. But would she retire like any old folk? Oh no, She never could rest, her middle name was 'Go'. She'd go to lunch and go to the store, She wouldn't cook, but did dishes galore. She bought a computer, take my word, She soon became a computer nerd. She was on the web, E-mail was a snap Genealogy Club too, for a family tree map. She was a Methodist member with a zest for living, She was a caring person who was cheerful and giving. So let us honor her 96 years, What a great long life, No need for tears.