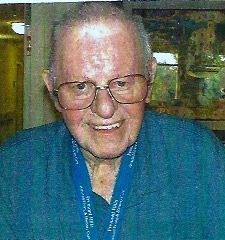 John Bettencourt (Gene, Geno) passed away in his sleep on March 3, 2017 at age 94. He has joined his wife Ruth (Tiny, Leno) who predeceased him in 2009. He is the last child of Antone and Marion and was predeceased by his siblings Alma Dutra, Robert Bettencourt, and Barbara Lewis. He is survived by his son James, 5 nieces in CA, and more nieces and nephews in KS, MN and NC. John spent his entire life in Centerville/Fremont, graduating from Centerville Elementary and Washington High. He joined the Centerville Concert Band as a trumpet player at age 13 playing local Portuguese Holy Ghost festivals and was a life-long member of the Musicians Union. After graduating high-school, John worked for a short-time at Pacific States Steel prior to enlisting in the Navy. While stationed in Hutchinson, KS he played in the USO band where he met Ruth who was a Navy radioman and a USO dancer from Minnesota. John was re-assigned to the USS Hornet for the invasion of Japan. After the end of the war he and Ruth married in July of 1945. John and Ruth took up residence in Centerville and raised their son. John worked at Leslie Salt/Cargill for over 40 years, spending a year and a half with Ruth developing a salt facility in Port Headland, Australia, which they both enjoyed. Upon their return from Australia they completed a vacation cabin in Sonora, CA where they spent many enjoyable weekends and summers. He retired in the 80s as superintendent of salt production. John had a delightful sense of humor, rarely missing an opportunity to insert a silly pun into the conversation. He and Ruth enjoyed hunting, fishing, and camping especially with their good friends the Fereira's of Niles. Nobody camped like they did, creating lavish campsites with carpeting and outdoor showers and toilets. Every Spring they enjoyed the Easter celebration at the Fereira Ranch in Niles. John had his first major stroke in 2009, just days after placing Ruth, who had Alzheimer's, in a board-and-care. Ruth passed away just days after John had recovered enough to visit her one last time. John's activities following this stroke and his wife's death were primarily homebound; his favorite pastimes included watching old TV programs, feeding the Hummingbirds, talking for hours on the phone with his niece Janet Dutra who he called Jelly Bean, and Friday night dinners with her and his son. John suffered a second stroke in early Summer 2016. His last months were spent on hospice at Common Destiny of Fremont a board-and-care where he received the loving attention he needed. Donations can be made in honor of Ruth Bettencourt to the The Alzheimer's Foundation of America.