Joseph “Joe” Ferrau, 88, passed away peacefully on Saturday, September 25, 2021 in Fremont, CA, a city he called home since 1962. One of Fremont’s pioneer business owners, Joe was the founder of Fremont Rubber Stamp, which he began in his garage in 1964. Through forging partnerships with various office supply stores, including the much-missed Ledeen’s in the Fremont Hub, he was, by 1972, able to grow the business so much that he moved it to the space it still occupies today on Grimmer Boulevard. Joe happily worked at his successful enterprise until the day before his passing. Fremont Rubber Stamp will continue operating under the leadership of Joe’s daughter, Kathy.

Born in 1933 in Jamestown, New York, Joe served honorably in the US Air Force as a First Lieutenant, where, while working as a radar navigator,  he survived a plane crash in Alaska and saved his pilot from the wreckage of the burning plane. In the 1960s and ‘70s, Joe could be found bowling at Lido Lanes or Granada Bowl, and in the ‘80s, throwing horseshoes at the Tri-Valley Horseshoe Club. Later, he became a devoted Bingo player, and he pursued this hobby at The Fremont Elks Club, LOV Newark, and the Southern Alameda County Buddhist Church in Union City. He made many Bingo Buddies over the years, and sometimes even got to call out his favorite winning word.

Joe is survived by the love of his life, his wife of 60 years, Esther, son Alan Schnars, daughter Kathy Davis and son-in-law Robert Davis of Fremont, his sister Diana Manzella of Fredonia, NY, and many nieces, nephews, cousins, and great-nieces in the Jamestown NY and Erie, PA areas and beyond. He will also be missed by his granddaughters Linda Ross and Amber Lamphier, great-granddaughter Breann Yonan, and by his beloved “brother from another mother,” Vince Suchoski, Vince’s wife Carolyn, and their children, Venetia and Christian, along with the extended Ranoa Family. 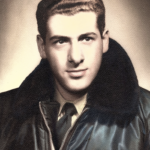