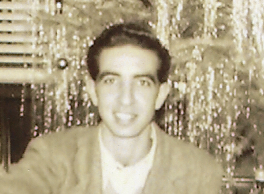 Louis Falzon was born on September 20th 1922 in San Francisco, Ca. He was born to loving parents, Emanuel and Emily Falzon, who both immigrated from Malta to the United States. Louis was an only child and married the love of his life, Mary A. Falzon in 1956. The couple proudly lived among the Maltese community in the Bay View district of the City until moving to Fremont in 1970.

Louis served in the Army Air Corps, was a veteran of World War II, and was always very proud of his service. He worked in the Railroad service and BART until his retirement. He was Mary’s constant companion and her caregiver in their later years until she passed away in 2011.

Louis enjoyed many things. When he was younger, he particularly enjoyed camping, hiking, and gold panning. He also enjoyed reading and was known by many for his cooking and gardening. He lived a simple life and especially cherished time with family and friends. He showed a real talent for life.

He is survived by many nieces and nephews and will be greatly missed by all.

A graveside service will be held at 11:30 am on Friday, January 28th at Holy Cross Cemetery in Colma. For any questions, please contact Berge-Pappas-Smith Chapel of the Angels for further assistance.