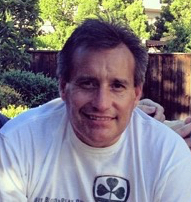 Patrick Daniel McCoy was born on December 29, 1965 in Santa Clara, California. He was the 5th child born to Marty and Suzanne McCoy. Marty wanted to gain a tax deduction in 1965, so, though Pat was due in January 1966, he came by cesarean birth providing Marty a $600 deduction. Pat went through the public school system in Fremont, graduating from Washington High School in 1984. Pat loved playing football in high school and reluctantly earned his Eagle Scout badge along the way. Before graduating, Pat became enamored with a pretty little freshman whom he later married. Angela Rene Freeman remained the love of his life for the short 27 years he had. One day while riding in the car with his father, Pat said, 'Dad, I never realized just how much I love Angie. I couldn't live without her.' Pat and Angie were blessed with three very special children. It started with a very cute baby girl that only grew more beautiful with each passing year. Allie Rene was joined by John Patrick and Colton Marshall. The boys, like their father, loved playing football for the Orange and Black. Pat became a builder tutored by the likes of Forrest Bodily. He became a superintendent for Kaufman and Broad. His career there ended with a broken back. That was the beginning of a life of diminishing health. The year 2008 was very difficult for the country. The latest depression brought the building trade to a halt. The next several years were very difficult. Pat tried and tried to get work but jobs were very scarce. Finally he landed a job in Fremont as a superintendent again. He worked so hard making it go that his health began to suffer. He began to experience shortness of breath and was hospitalized. He realized he had to do something else and resigned. Things started looking bright for Pat when he applied for a job with Devcon as a builder of homes. What really pleased Pat was the news that his son, Colton, was going on an LDS mission to Panama City, Panama. In a conversation with his mother he said, 'Can you believe it mom? I'm going to have a son on a mission.' With the prospect of having a new job and knowing that his boy, Colton, would soon be in the mission field, Pat left us. Now it is our job to carry on.