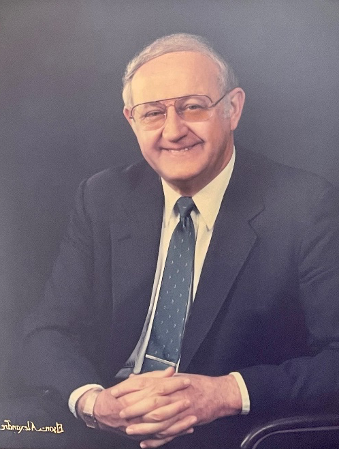 Robert Benya, of Fremont California, passed peacefully on September 20,2022. He was 91 years old. Thankfully, Bob is no longer suffering. He was born in Yonkers New York in 1931 to Michael and Suzan Benya, and was the youngest of 11 children. He graduated from Syracuse University in 1953. It was here that he met the love of his life Dorothy Deiso. He then entered the United States Air Force and spent 6 years in the Air Force as a pilot. Bob and Dorothy married on July 2, 1955.
In 1958 Bob left the Air Force and moved on to law school at Hastings College of Law in San Francisco. He then practiced in Fremont for 40 years.
Bob will always be remembered for how he could light up a room whenever he came in with his kindness, exuberance, and energy. Whether it was with a historical fact or story, a hilarious joke, or a booming song. He entertained his audience with quite a few big, tall stories, and some were repeats. However, everyone laughed equally hard each time because we all enjoyed the storyteller in him. Bob had a beautiful voice, and could break out in song at the drop of a hat and engage even the most timid person to join along in song. Bob also had an uncanny knowledge of history surprising you with the most trivial pieces of knowledge.
In addition, Bob enjoyed sharing his Czechoslovakian heritage. Hosting a yearly Easter party where he would share food, culture, and song with friends and family.
Bob was involved in many service organizations. He served as President of the Fremont Rotary, was involved with S.I.R.S, and was a part of the Washington Township Men’s Club. He was also a member of the Fremont Unified School Board from 1974- 1978.
Bob is survived by his wife of 67 years Dorothy Benya of Fremont. Alane and (Mark) Loisel of Livermore, California. Brigid and (Kent) Lester of Cedar Park, Texas. Christopher and (Amy) Benya of Petit Jean Mtn, Arkansas, brothers Michael Benya of Novi Michigan, and Vincent Benya of Pompton New Jersey. 8 grandchildren and 9 great-grandchildren.
Visitation will be at Berge Pappas Smith Chapel of the Angels, 40842 Fremont Blvd., Fremont, CA on October 13th starting at 4:00 followed by Rosary beginning at 6:00. Funeral Mass will be on October 14th at St. Joseph’s Church in Fremont at 11:00 a.m. Bob will then be laid to rest at St. Joseph’s Cemetery in Fremont CA.